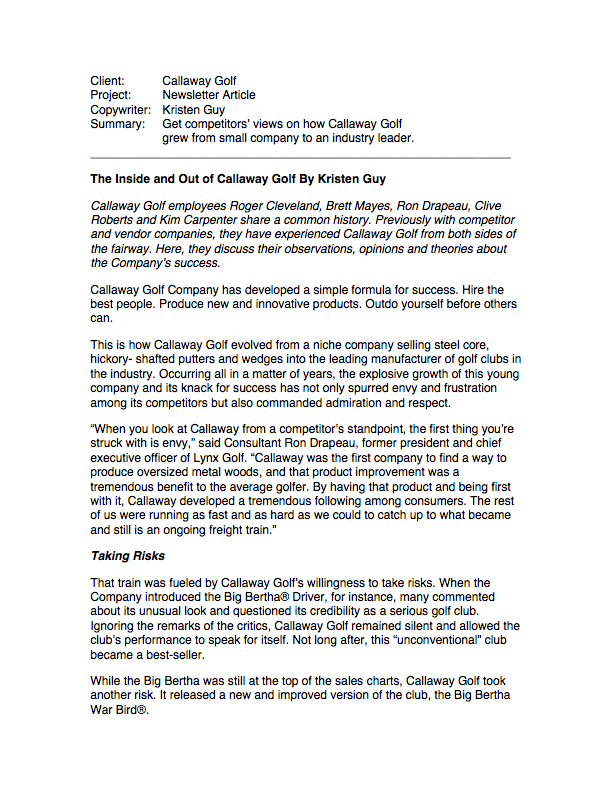 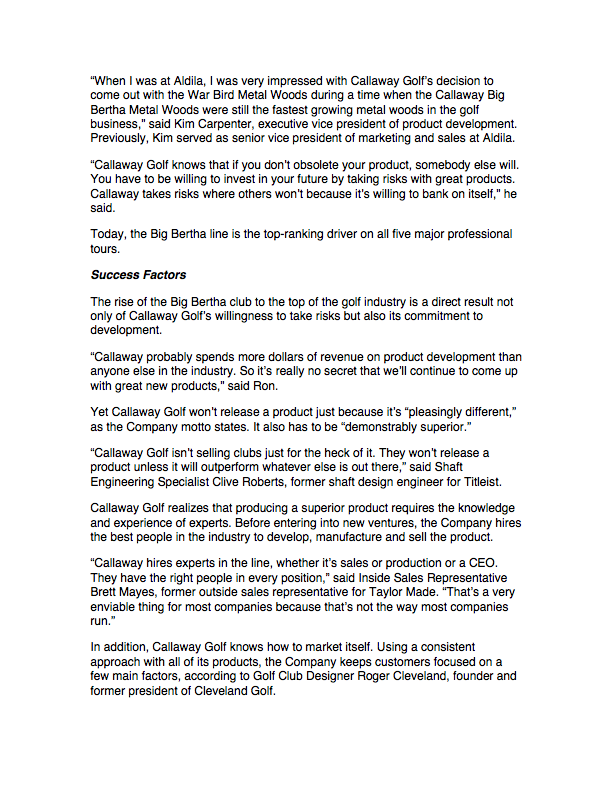 The Inside and Out of Callaway Golf

Callaway Golf employees Roger Cleveland, Brett Mayes, Ron Drapeau, Clive Roberts and Kim Carpenter share a common history. Previously with competitor and vendor companies, they have experienced Callaway Golf from both sides of the fairway. Here, they discuss their observations, opinions and theories about the Company’s success.

Callaway Golf Company has developed a simple formula for success. Hire the best people. Produce new and innovative products. Outdo yourself before others can.

This is how Callaway Golf evolved from a niche company selling steel core, hickory-shafted putters and wedges into the leading manufacturer of golf clubs in the industry. Occurring all in a matter of years, the explosive growth of this young company and its knack for success has not only spurred envy and frustration among its competitors but also commanded admiration and respect.

“When you look at Callaway from a competitor’s standpoint, the first thing you’re struck with is envy,” said Consultant Ron Drapeau, former president and chief executive officer of Lynx Golf. “Callaway was the first company to find a way to produce oversized metal woods, and that product improvement was a tremendous benefit to the average golfer. By having that product and being first with it, Callaway developed a tremendous following among consumers. The rest of us were running as fast and as hard as we could to catch up to what became and still is an ongoing freight train.”

That train was fueled by Callaway Golf’s willingness to take risks. When the Company introduced the Big Bertha® Driver, for instance, many commented about its unusual look and questioned its credibility as a serious golf club. Ignoring the remarks of the critics, Callaway Golf remained silent and allowed the club’s performance to speak for itself. Not long after, this “unconventional” club became a best-seller.

While the Big Bertha® was still at the top of the sales charts, Callaway Golf took another risk. It released a new and improved version of the club, the Big Bertha® War Bird®.

“When I was at Aldila, I was very impressed with Callaway Golf’s decision to come out with the War Bird® Metal Woods during a time when the Callaway Big Bertha® Metal Woods were still the fastest growing metal woods in the golf business,” said Kim Carpenter, executive vice president of product development. Previously, Kim served as senior vice president of marketing and sales at Aldila.

“Callaway Golf knows that if you don’t obsolete your product, somebody else will. You have to be willing to invest in your future by taking risks with great products. Callaway takes risks where others won’t because it’s willing to bank on itself,” he said.

Today, the Big Bertha line is the top-ranking driver on all five major professional tours.

The rise of the Big Bertha® club to the top of the golf industry is a direct result not only of Callaway Golf’s willingness to take risks but also its commitment to development.

“Callaway probably spends more dollars of revenue on product development than anyone else in the industry. So it’s really no secret that we’ll continue to come up with great new products,” said Ron.

Yet Callaway Golf won’t release a product just because it’s “pleasingly different,” as the Company motto states. It also has to be “demonstrably superior.”

“Callaway Golf isn’t selling clubs just for the heck of it. They won’t release a product unless it will outperform whatever else is out there,” said Shaft Engineering Specialist Clive Roberts, former shaft design engineer for Titleist.

Callaway Golf realizes that producing a superior product requires the knowledge and experience of experts. Before entering into new ventures, the Company hires the best people in the industry to develop, manufacture and sell the product.

“Callaway hires experts in the line, whether it’s sales or production or a CEO. They have the right people in every position,” said Inside Sales Representative Brett Mayes, former outside sales representative for Taylor Made. “That’s a very enviable thing for most companies because that’s not the way most companies run.”

In addition, Callaway Golf knows how to market itself. Using a consistent approach with all of its products, the Company keeps customers focused on a few main factors, according to Golf Club Designer Roger Cleveland, founder and former president of Cleveland Golf.

“Those factors are what differentiate one company from another, which is key… especially when the customer is getting bombarded by all kinds of different messages. If you have a few key points that are different and that work and you back them up with advertising, you can succeed,” he said.

Customer service is another reason Callaway Golf is on a different level than the rest of the companies, said Brett. The “unbelievable coverage” provided by the Sales Department, for example, allows the Company’s sales representatives to keep in constant contact with customers. They answer questions, help keep the golf shops stocked with Callaway products and make follow-up calls to ensure that the shops have all they need to function smoothly. This commitment to customer service adds to the frustration felt by salespeople from other companies.

“Callaway raised the level of customer service to be the best in the industry,” Ron said. “They raised their quality level and their manufacturing capabilities up to be the best in the industry…just developed the brand from all facets. It wasn’t simply marketing; it wasn’t simply a great product. It was doing all of the things right. Whatever it was, Callaway was really focused on being the best at it. In the meantime, the rest of us (competitors) had a very difficult time trying to compete because the bar kept getting higher.”

Being the first golf company to offer stock raised the bar even higher.

“This ended up being a fabulous marketing technique,” said Ron. “Callaway Golf went out and found investors, who were golfers for the most part, and now it had shareholders buying equipment. What was created was this whole new base of people supporting the Company and talking about it and the products. The situation played upon itself. The stock value enhanced, so more people bought stock. They supported the Company and talked about how great the products were. They also played the products. It just mushroomed. And this all came from a company that was very, very small five years ago.”

At the heart of it all is Mr. Ely Callaway himself. A business veteran with more than 40 years of experience, his philosophy includes conducting business with honesty and integrity and producing new and innovative products.

“The primary reason for Callaway Golf’s success is Mr. Callaway and his leadership,” said Kim. “There’s nobody else like him in the golfing industry. He’s been able to define and focus on innovation, both in management style and products. He’s also been able to attract great people.”

Roger agreed. “There’s a culture here that is really interesting and it all comes, basically, from Ely. His policy is that there’s nothing you can’t do if you’re given the proper resources and you put your mind to it. And everyone at Callaway is getting this opportunity. It’s a real people-oriented company and they treat the employees great – better than any other company I’ve heard about,” he said.

Only One Callaway Golf

With the right combination of product, people and philosophy, Callaway Golf has used a simple formula to turn a small business into an industry leader. It’s a feat which some believe is a once-in-a-lifetime phenomenon.

“There’s not going to be another Callaway Golf,” said Brett. “No one is going to be able to create the roots among the golfing industry like Ely and everyone who has worked here has done. This is something that wasn’t a fluke and it’s not going to happen again.”

Although it may be possible to copy the philosophy, without the resources, the budget and the people that Callaway Golf has, it won’t happen, Brett said. “You’re not going to have the passion that people here have. You can mimic it, but you’re not going to be able to feel it.”

Ready to discuss your marketing and business goals? Get in touch with me here.